I’m pleased to announce I completed my first half-marathon on March 21st ! My cousin said he was going do it on New Years and I agreed to join him. I started training in middle of February; I realized that I could no longer procrastinate. Training went well, I got in one or two runs during weekdays; I eventually built myself up to running 6 miles on a weekday run. For the last three weeks of training before my race I did a long run on the weekend. My last long run was a little over 11 miles, this gave me the confidence to believe I could finish the race. 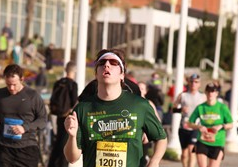 The Shamrock Marathon consisted of a marathon, half-marathon, 8k, and a few other smaller races. It was in Virginia Beach, there were lots of people and tons of energy. My race started at 7:00am, we actually started the race a few minutes late. It wasn’t a big deal, the D-tag on my shoe recorded the exact second I started the race. Since I started in the back of the pack, I was passing people throughout the whole race. I think this gave me motivation to run faster, I impressed myself with a chip time of 1:46:13. Also the perfect weather (slightly cool), flat elevation, and volunteers (cheering, handing out water and gel packs) all helped me run better. It was great reuniting myself with my family after the race and helped me forget the physical pain I was in. Overall it was a superb and unforgettable weekend.

Before the Shamrock marathon I already signed up for another half-marathon on May 16th. It is the Marine Corps Historic Half in Fredericksburg, VA. After a week of rest after the Shamrock race I started training again. My goal is to beat my previous time. I ran 13 miles yesterday on the W & OD trail and it kicked my butt, it was hot and hilly. Luckily I have still have several weeks to improve.