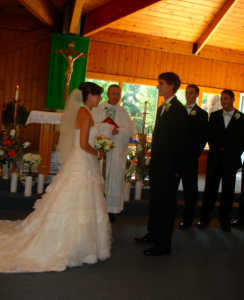 Congratulations to Esther and Michael for getting married! Right now they are in the Lombok Island of Indonesia sipping cocktails and relaxing on the beach. The Wedding took place on August 31st. It was a Sunday and it was the day before Labor Day. Esther and Michael live in Seattle, Esther came into town about a week before the wedding and Michael came in that Friday. A lot of preparation went into the wedding; my mom and Michael’s mom did a lot of work. In the end the wedding turned out better than anyone could have expected.

By the way Esther is my only sibling and she is three years older than me. I had been looking forward to the wedding the whole summer. Every time Esther visited us this summer she brought about 20 beers with her. This is because Michael brews his own beer and made enough beer for everyone who attended the Wedding.

Well the Friday before the Wedding Michael’s family and ours ate dinner at the Icehouse Café in Herndon. This held extra significance because this is where Esther and Michael had their first date. I ate the Monk fish, which was really good. What really stole the show was the Warm Crispy Duckling salad that I ate, it’s the best salad I have ever had. Afterwards Esther had her bachelorette party; meanwhile the guys went out to Arlington to hang out.

The next day Michael picked me up and went for lunch at a great Vietnamese restaurant called Four Sisters. It is located in a Vietnamese shopping center near seven corners in Falls Church. We probably ordered about 10 orders of spring rolls. The chicken pho was amazing, probably the best cure for a hangover you can get. Michael gave all the guys two awesome disc golf discs. I was so glad because I don’t have any disc golf discs, and also because it said Tom The Bomb on my discs. We all played disc golf after lunch, and even though I’m not that good, I improved a great deal from last time I played. Greg, the photographer, hanged out with us all day and took lots of photos.

Sunday was the special day. I have to admit I was a little bit nervous; I wanted everything to go as smoothly as possible. After doing some errands I got changed and met everybody and Michael’s house. From there I drove Michael to the church; Michael was very calm and composed. The Ceremony was held at St. Thomas a Becket in Reston. I helped usher people at the church, it great seeing family and friends arrive. When the time came I got to escort two people, first my mom, then I came back and escorted one of the bridesmates.  The mass was really nice. One thing I noticed was that the priest never said, “you may now kiss the bride.” After the Wedding I was so excited that I forgot to pay the choir! I took care of that the next week.

Next was the reception. It was just our luck that there was an accident on route 7 on our way there. The road was blocked off, so we took a detour. It probably delayed us about a half our. When we arrived we rushed straight to take pictures. The Reception was held at the River Creek Country Club. What a picturesque place this was! In the back was a spacious balcony with an exquisite view of the Potomac River. After pictures they introduced the Wedding Party and then dinner began. My dad, the best men, and the Maid of honor gave speeches, all of which were superb. Soon we were all on our feet dancing the night away on the dance floor. An extremely talented soulful band called the Mustangs played all night. They were a really big hit! I had so much fun partying and dancing with everyone. We all ate cake and rejoiced. I’m extremely happy for my sister and proud of all of her successes.