Last December my friend let me know of some flight deals going on. There were different options to travel to, and I was hopeful things would return to normal later the following year. I choose Morocco as it was a far away exotic place I had never been to before. It seemed like an exciting place that has appealing deserts, history, architecture, food, and more. I was not disappointed.

My girlfriend Luisa and I only had about a week to spend on our trip. We decided to pack as many places as we could fit and rented a small car from Casablanca airport. I was bug-eyed from the airport as everything was new to me. Checking out our rental car from the airport went smoothly. It was the first time I drove a manual in a long time, and it turned out to be a great ‘teaching opportunity’ to teach Luisa how to drive manual throughout the trip. The first challenge was to find gas, as the gas tank came empty. Then the second challenge was reversing the car, because the stick shift would not shift into reverse. Thankfully the car rental guy answered his phone and told me about a little tab on the stick shift that you must pull up to move it into reverse. The third challenge was just driving in Casablanca. The roads are crazy. There are just so many cars and people everywhere moving in a chaotic fashion. 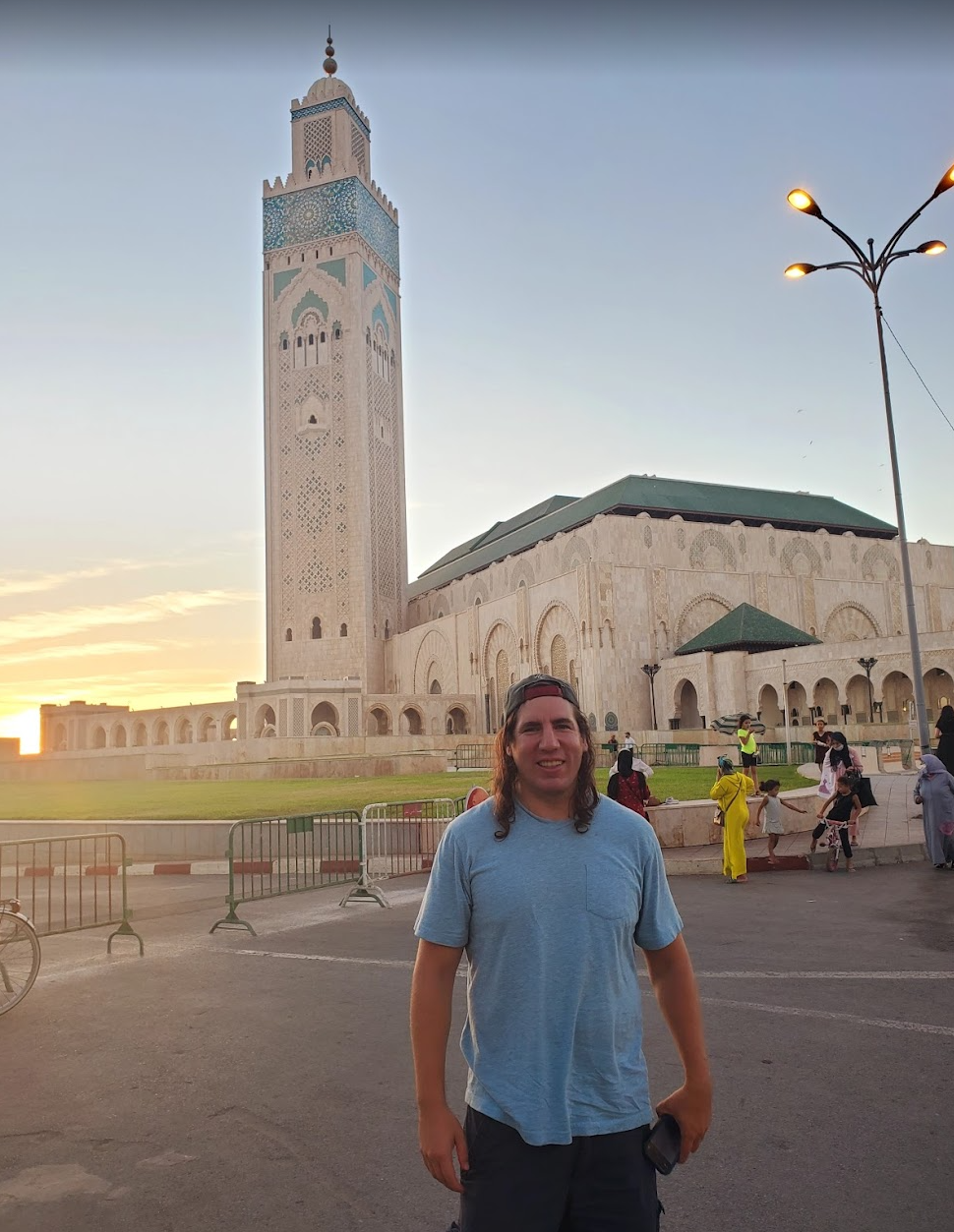 We drove straight to the Hassan II Mosque. Evening was fast approaching, and we had basic necessities such as food and shelter in the back of our minds. We found a parking spot and took a stroll near the Hassan II Mosque, but it was closed. Instead, we walked around the vicinity taking pictures and people watching. Afterwards we ran to Rick’s café to catch dinner. Running daily for me is a blessing as well as a curse as I am doing a running streak where I run at least a mile a day, and it can definitely complicate logistics when traveling. Unfortunately, we didn’t run fast enough as the restaurant closed shortly before we arrived. But it was only around 9pm. We walked around the waterfront and stopped at two other restaurants that were also closed. We ended up back near the Hassan II Mosque where we able to enter the Le Gatsby restaurant right before they closed. From what we could understand they only had chicken tagine for us to order. We ate it, and also had a smoothie, it hit the spot.

From there we drove to the capital, Rabat. We figured it would save us some time on the way to Chefchaouen. It was a strange drive as we were one of the few cars on the road and we kept on getting stopped at the many checkpoints. We couldn’t understand what the police were saying and it was only later we figured out that there was a curfew and everything was locked down. Fortunately, we made it to Rabat and found a hotel and crashed. Rabat is a very nice city, the next day I took a jog past the French embassy and a nice park. The area reminded me of Washington D.C. a little bit. In the first part of the day we visited the Hassan tower, Mausoleum of Mohammed V, and the Kasbah of the Udayas. Then we continued to Chefchaouen. 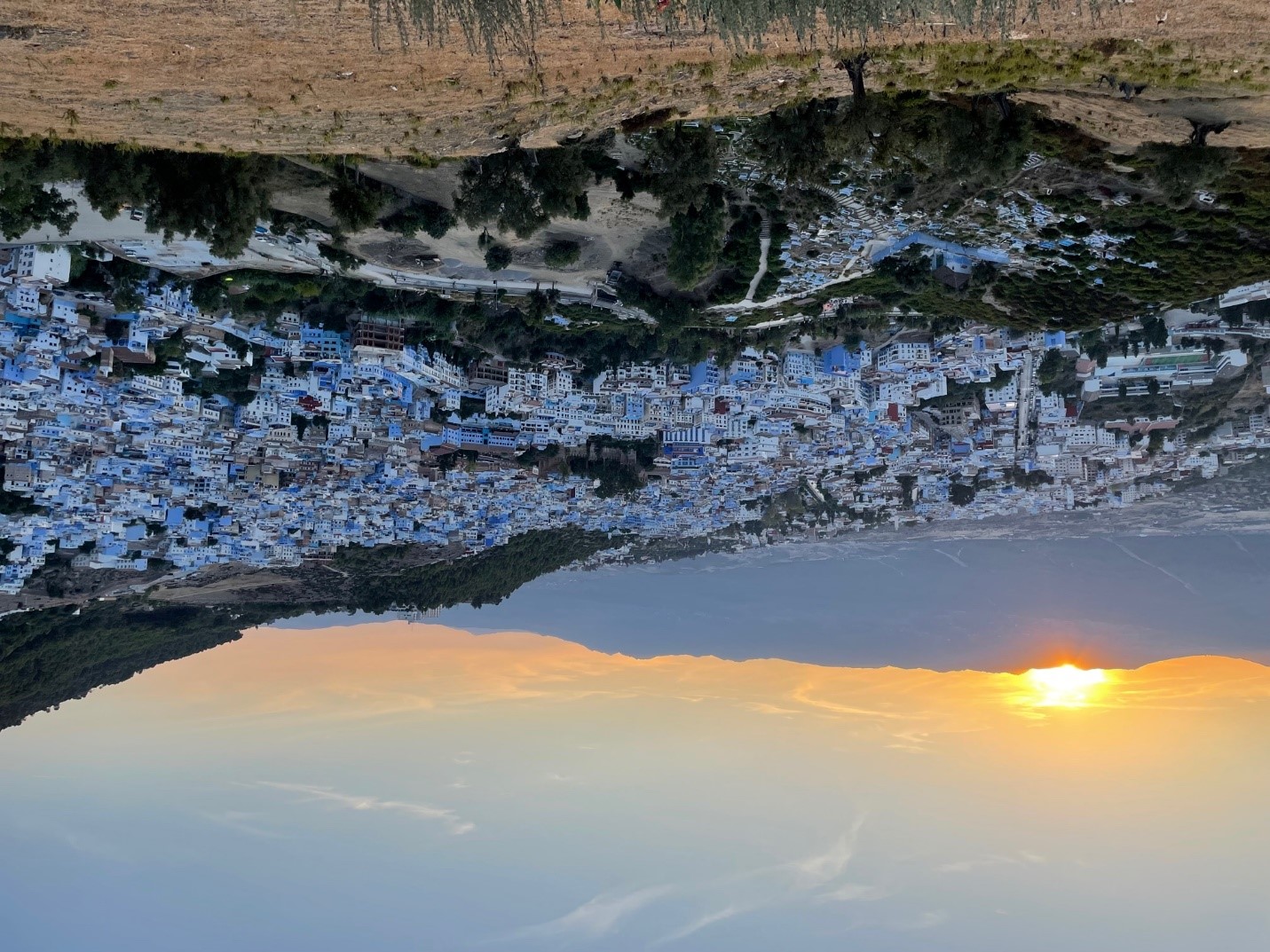 After checking into our hotel in Chefchaouen, we had enough time to get a taxi to the Spanish mosque overlooking the city and watch the sunset. Then we walked down the hill and into the city, taking many pictures of the blue historical city center. The next day visited the kasbah. Then departed to Volubilis. I loved learning about all the Roman history and how it intertwined with the history of Morocco. We were one of the few tourists there and had very nice tour guide. Afterwards we drove to Fez while there was still daylight. In Fez, we found a tour guide before we could snap our fingers right after we parked next to the ancient medina. He escorted us to our riad through the maze of small streets. The next day he took us on a tour of the medina. We tried to put our bargaining skills to work and bought some Moroccan rugs and the leather goods. We were so enamored by the medina, we ended up leaving the Fez in the late afternoon. 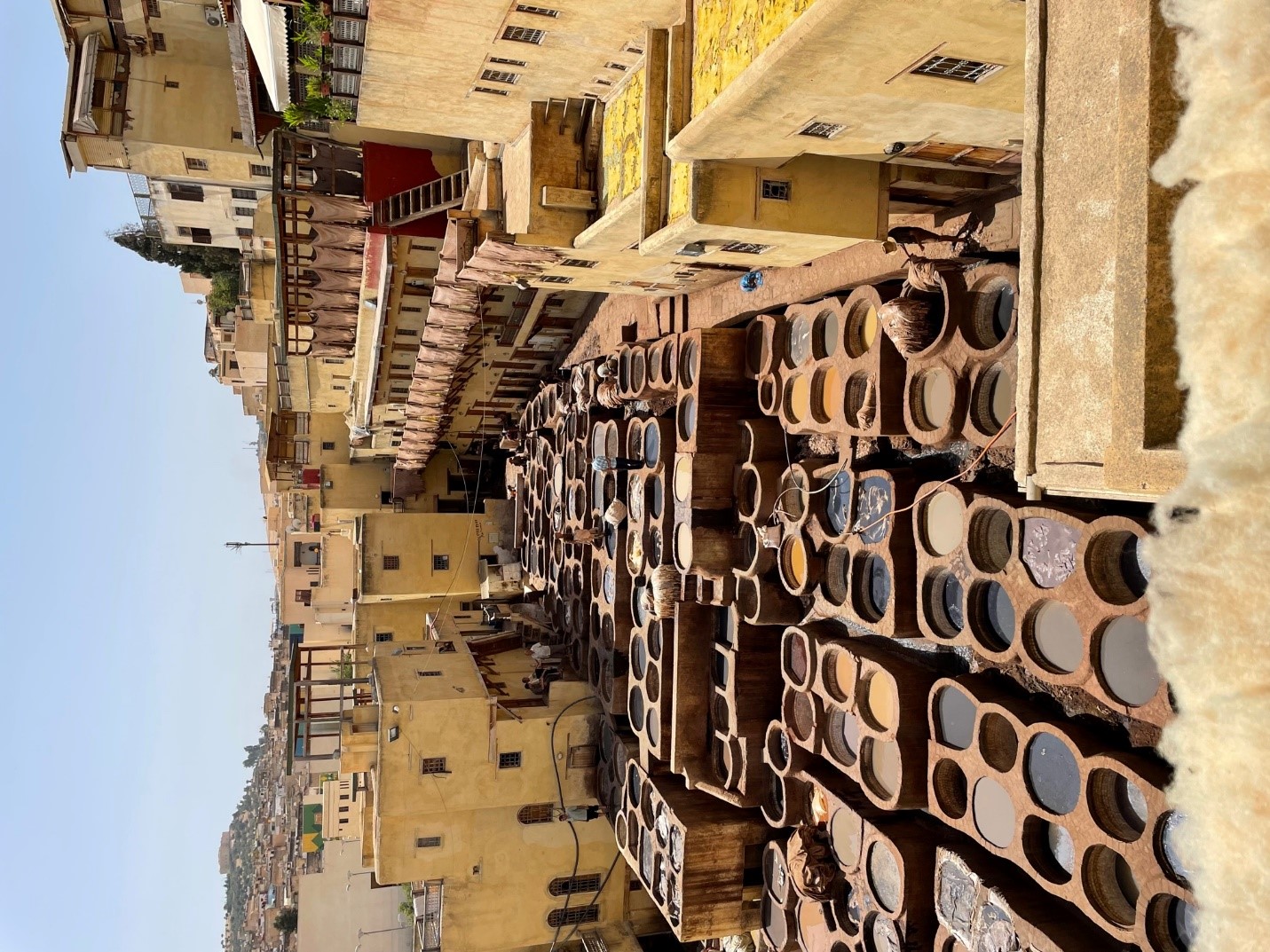 We reached Erfoud late after driving for more than seven hours, and were able to check-in without any problem. 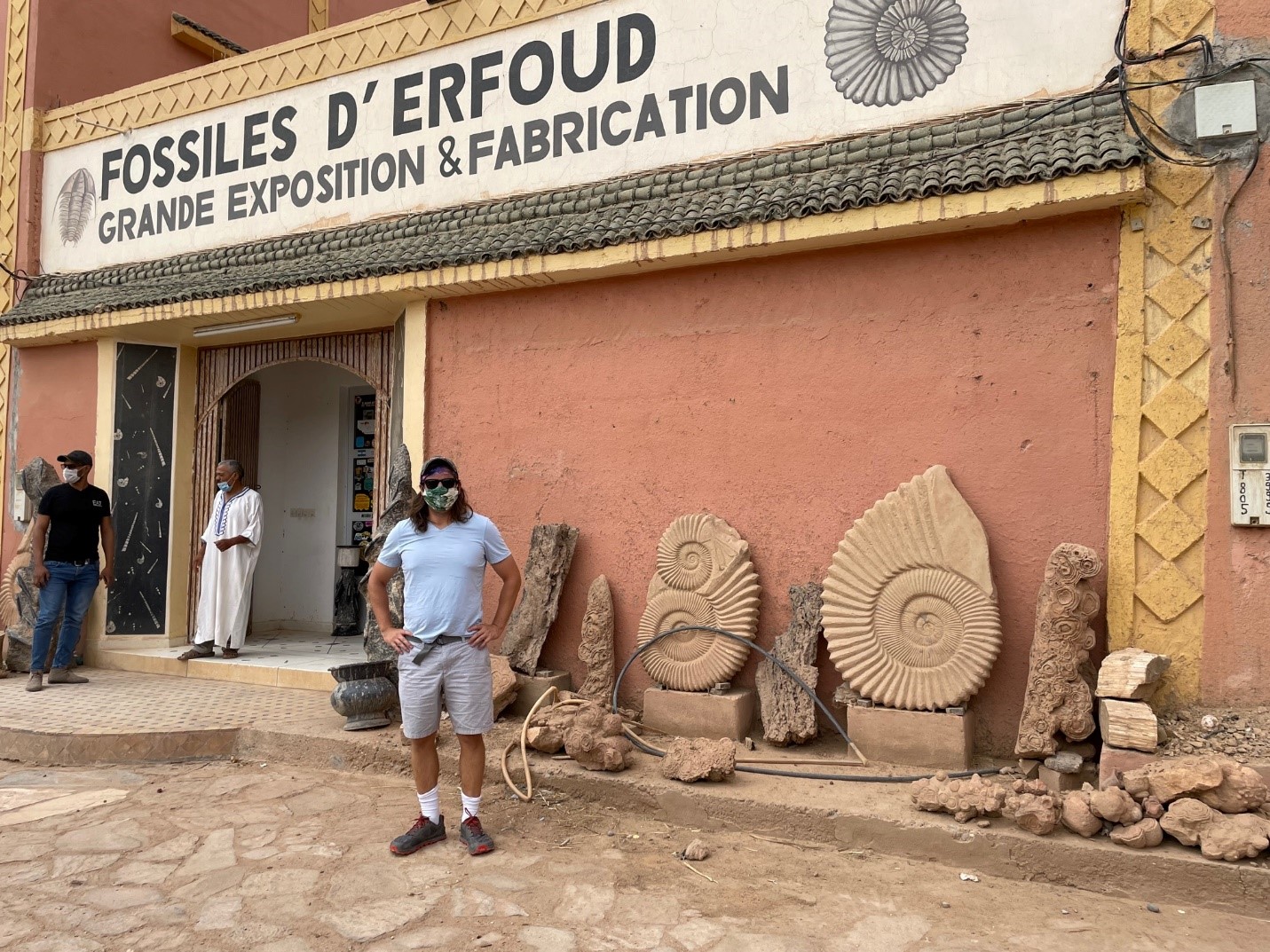 The next day we visited the fossil shop. The shop owner was amazing, and showed us his fossils that were hundreds of millions of years old. They use big saws and other tools to cut huge blocks of marble, and you can see the ancient squid and ammonites. After eating some dune pizza with olives and dates on it for lunch. 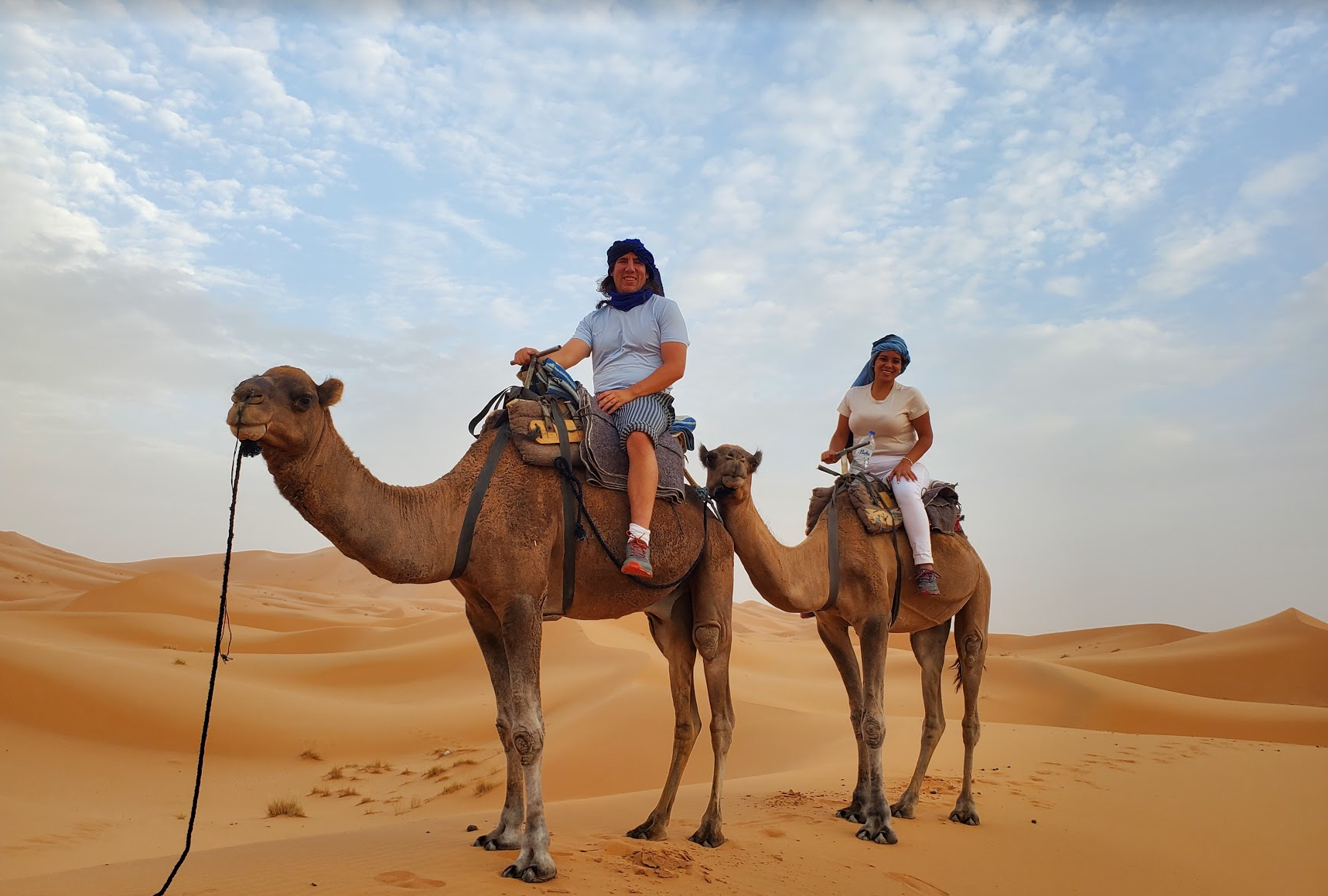 We drove for another 30 minutes to Merzouga, our next destination. Our camp was right next to the sand dunes. I ran a mile up and down the sand dunes, that was hard. Then we had a camel ride and a nice dinner. We were the only tourists in the camp. Fortunately, our hosts treated us really well with dinner, hospitality, and music. 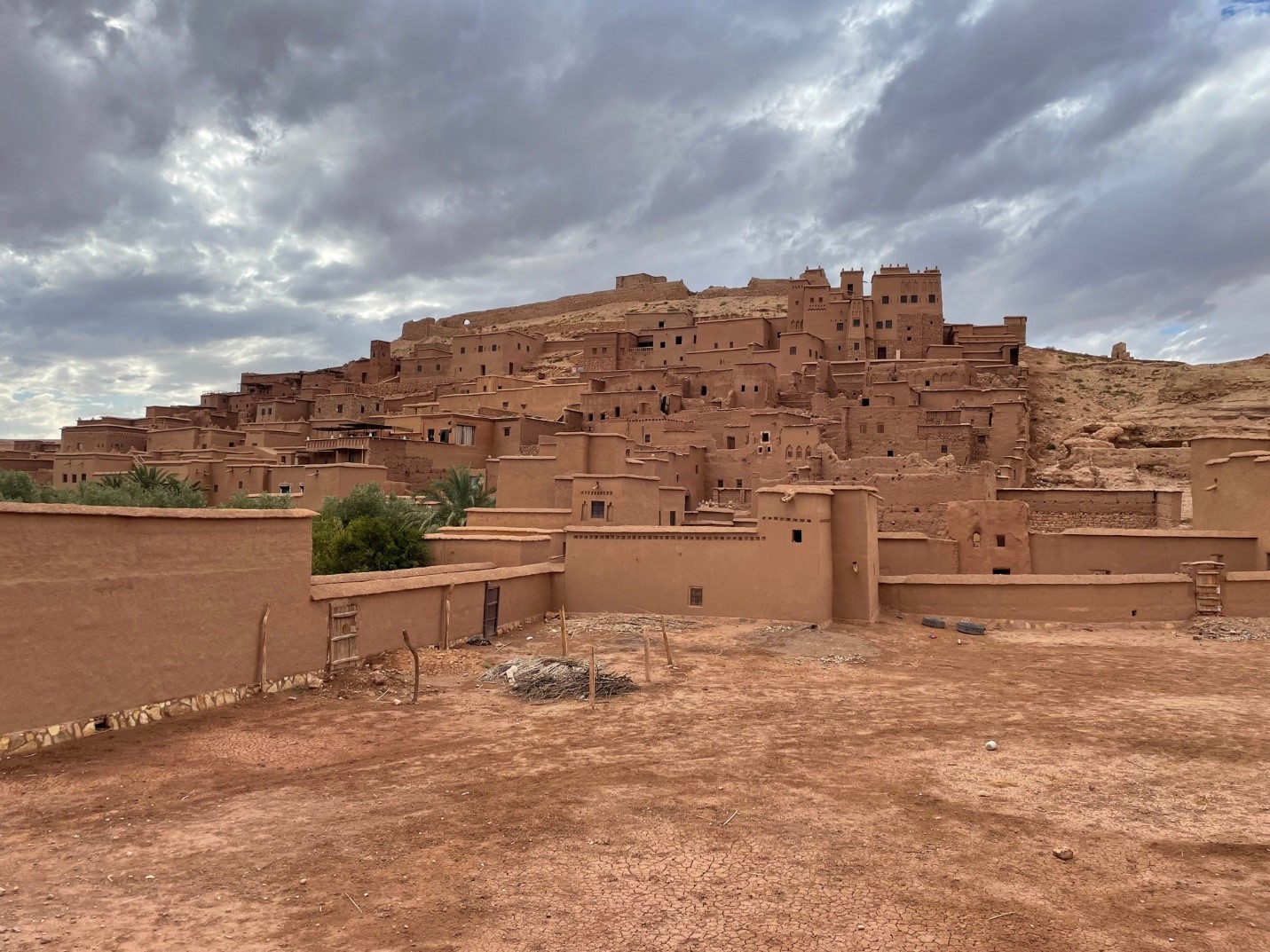 The next day we drove all day to reach Marakesh. Midway, we stopped at Ouarzazate where they filmed many movies including Gladiator, Cleopatra, and Game of Thrones! Then we drove through the impressive Atlas Mountains. We arrived at Marakesh late at night and stayed at a beautiful riad. Unfortunately, we had to leave early the next day to get to the Casablanca airport so we did not get to explore Marakesh. 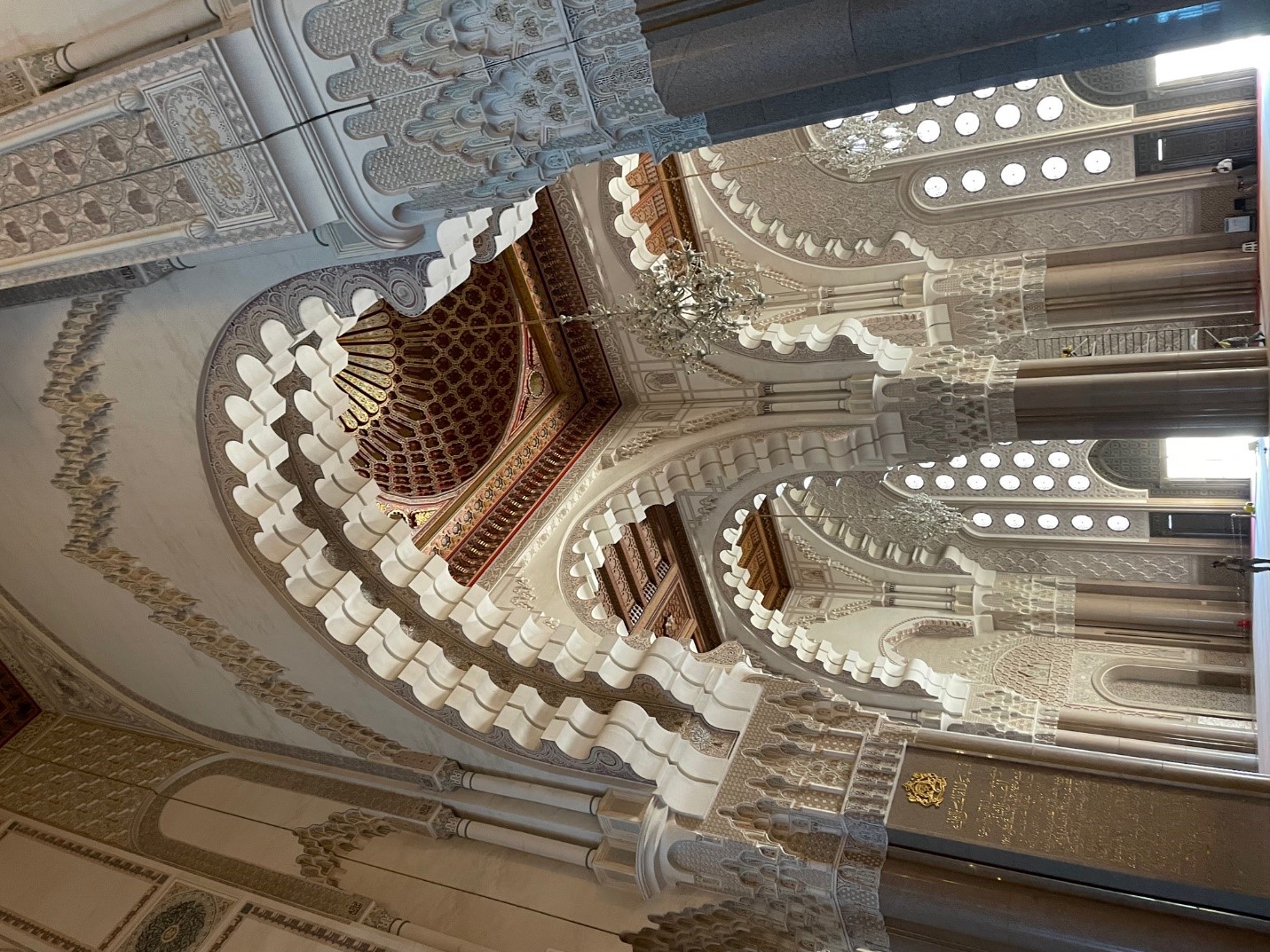 Oops, I made the mistake of not scheduling COVID tests for exiting the country. Fortunately, we were able to reschedule our flight. We took advantage of the extra two nights enjoying Casablanca and visited the Hassan II mosque.

To wrap it up, I need to say that the people of Morocco are amazing. We met so many kind and friendly people throughout our trip. There were a few times where I was stressed out because sometimes people try to get money from you for directions or try to force a tour on you. However, I never felt my safety compromised on the trip. Overall, there were many good vibes and I wholeheartedly recommend a trip to Morocco!

How I think about GIS

GIS is my profession. What is GIS? I suppose about half the people who I talk to know what it is. It can stand for either Geographic Information Systems or G...