Last month I was fortunate enough to have my first flying lesson. My sister gave me a flying lesson for my birthday. It was through Xperience Days, a pretty cool website where you can give unique experiences nationwide. I had originally scheduled the flight three weeks before, it was rescheduled once due to thunder storms. This time it was in danger of being cancelled again, we checked the weather before take off and we were able to squeeze our flight before the storm arrived. I had a phenomenal experience at Aviation Adventures in Leesburg Airport. The lady behind the Front Desk was kind and I could tell that she had a genuine interest in aviation herself. She is pilot herself and it projected outward as she gave me some background information and showed me around the office. My instructor was Buck Smith. He was really easy going yet informative, always knowing what to say. He made me feel comfortable and was a great teacher. We started the lesson by inputting our flight information into the system and checking out some planes that were already in the air. Pretty soon we were out on the runway preparing for take off! 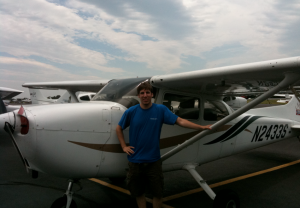 Buck took me through all of the take off procedures, from untying the harnesses to going through the pre-flight checklist in the cockpit. Before the flight I had originally assumed that he would be doing most of the flying and I might take over the controls for a little bit once in the air. When I found out I would be taking off I was excited and a little bit nervous. The first step was steering the plane to the runway. This was done with just the two pedals. I quickly learned that this was muck harder that using a steering wheel, but with Buck’s help we managed taxi the plane to the runway. When taking off I tried to keep the plane as straight as possible and pushed the throttle to the max. Buck made some adjustments as needed to make sure the plane didn’t steer off the runway and pretty soon we were up in the air. We headed to the Shenandoah Valley. Buck trained me to look at the horizon and use it to keep my wings parallel to the ground while keeping the nose angled up as we climbed into the sky. Eventually I practiced turning in the air by banking the plane. As I became more adjusted to the controls I asked a few questions and Buck included more material. For instance he explained how the rudder is involved in maneuvering the plane and where the meters are that measure altitude and speed.

Flying was bit tiring. I felt the effects of the high altitude. It was also a bit hot and stuffy in the cockpit. I was on edge the whole time flying and it took a lot of mental energy. I imagine it would take a lot out of a person on a multi-hour flight. In the end of the day I was truly captivated by my experience flying. I would really like to train for my private pilot license in the future, and I would do it with Aviation Adventures.