Even if someone doesn’t know what GIS is they have still used a GIS. Everybody has used Google Maps or Google Earth. Everyone uses a GPS navigation system to get somewhere. Geographic data is being presented and disseminated to you so you can make better decisions. Many times user location data is being collected automatically by the application to improve performance. User location data is very valuable because it can also be used for advertising as well as be used to improve algorithms for other services. A tremendous amount of work has gone into creating all of these maps. Much of the technology used to make these applications and analysis is intelligently hidden from the user.

Before GIS there were only maps. Computers revolutionized maps and the result was GIS. By understanding the transformation undergone by geographic information as it has moved from paper map to machine, you can understand GIS. Roger Tomlinson, also known as the father of GIS, coined the term GIS in the 1960s. It was in 1962 he presented a paper entitled, “Computer Mapping: An Introduction to the Use of Electronic Computers in the Storage, Compilation and Assessment of Natural and Economic Data for the Evaluation of Marginal Lands” at the National Land Capability Inventory Seminar in Ottawa. To provide a frame of reference, the first interactive game (SpaceWar!) was created in 1962. Computers wouldn’t even become mainstream for another two decades. Computers are still evolving, and so is GIS. I personally think the most interesting part of GIS right now is Web-based GIS.

Some important topics in GIScience include data collection, spatial data structures, spatial statistics, spatial analysis, visualization and data discovery. Here is a list of some examples:

GIS professionals use Google Maps and Google Earth because they are the best tools for what they do. They use other software as well depending on the task at hand. ESRI’s ArcGIS software has the biggest market share, but there are other types of proprietary GIS software. It is also possible to do almost any GIS task using completely free and open source GIS software. Finally, you don’t even have to be a GIS professional to contribute edits to OpenStreetMap, the free editable map of the world. 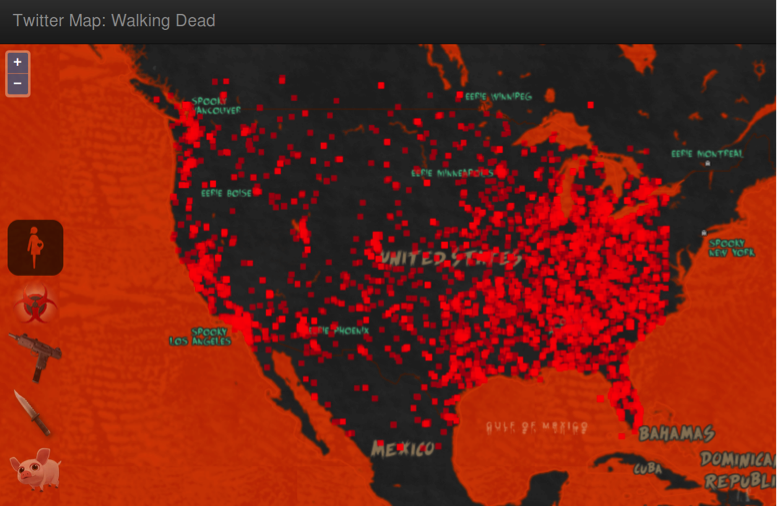 I had to include at least one map in my GIS post. Here is a screen of my Walking Dead Twitter Map for my WebGIS class. Halloween tiles courtesy of Mapbox

Credits: Many ideas for this post were taken from Twenty years of progress: GIScience in 2010 by Michael F. Goodchild.