The weather is starting to get crisp and fall is in the air, that means football is in full swing. On Sept 21st I went to the Redskins vs. Cardinals game. It was the first time I got to go to FedEx field; I went with several of my cousins. We took the metro and stopped at the Morgan Boulevard station, from there we had pleasant walk to the Stadium. We got some hooters wings to go and then went to our club level where we had a great view of the field. The Redskins got off to a great start by scoring on their first drive. They had a little trouble stopping the running game. Overall, the Redskins looked really good; Jason Campbell seemed more comfortable in the pocket, Clinton Portis got us first downs when it counted, and Santana Moss made some incredible Catches. One of the highlights of the game was when Carlos Rogers made a diving catch for an interception and then got up and ran it for 42 yards. The Redskins won 24-17. After a stellar performance last week against the Cowboys the Redskins have another big game Sunday against the Eagles. 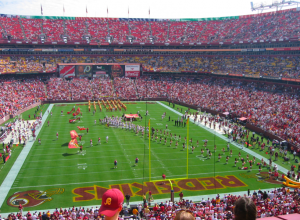 I was just able to update my fantasy football team, I’m surprised I am still in first place after last week’s debacle. Last week I tried to make some substitutions because some of my players had a bye week, but I forgot to press the submit changes button. So I was playing with only one quarterback and accidentally had the other two benched, and I also had one of my tight ends in the lineup even though he was injured. Now the 2nd place team is within 20 points of me! Luckily I learned from my mistakes and this week I am confident that my players will rack up lots of point. Check out my line-up: 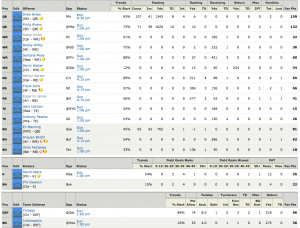