If your like Kanye West and don’t want no Robocop you can use Lego Mindstorms to create your own pacifist robot. Mindstorms NXT is a system that lets you build and program robots. Believe it or not it is made by LEGO. You can imagine building a robot using all of those fancy Technic pieces can’t you? These aren’t your standard Lego bricks. The Technic series are able to create more advanced models with more complex movable parts, such as gears axles, pins, and beams. The Mindstorms NXT system uses a computer that communicates with motors and sensor to make a lifeless model act like a real robot. The brain of the robot is called the Lego brick and is powered by six AA batteries. This brick has seven ports that connect to sensors and motors. The three motors typically run gears that enable a robot to move. The sensors include a touch sensor, a sound sensor, light sensor, and an ultrasonic sensor. A computer via USB or Bluetooth programs the Lego brick. All of these capabilities in an inexpensive package combine to make up the best way I know to get introduced to robots.

The included software Robolab is based on Labview. LabView is a visual programming language that allows you to program without knowing code. It is extremely easy and fun to use. The only downside is that it lacks some advanced features. You also have the option of replacing the existing firmware with opensource firmware made by third parties that let you program the Lego brick yourself using a variety of other computer languages. I tried to go this route after I built the four robots included and detailed in Robolab. I replaced the firmware with lejos, a firmware replacement that allows you to program in Java. I was able to connect the Lego brick to the computer and run some sample programs, but I’m going to need to learn more java in order to create my own program!

I took some photos and videos after I built my robots. Take a look so you can get a better feel of the Mindstorms NXT system! 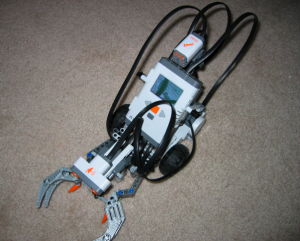 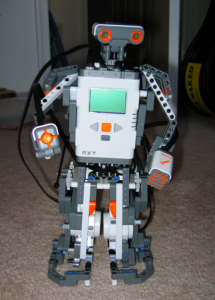 This final video is a demonstration of Spike. Spike is a scorpion looking robot that crawls forward until he detects an object within a certain distance of its unltrasonic sensor. In this case it is my foot. He then ‘stings’ the object with its tail. Fortunately he deactivates when a loud sound is detected by the sound sensor located in the rear.