Almost everybody has experienced either losing or breaking their cellphone, some more than others. The worst part is visiting your friendly local wireless carrier and finding out you need to shell out 60 bucks for their most affordable model despite the fact you got your previous phone free when you signed up for the two-year contract. We live in America, land of the free, the most technologically advanced nation in the world, a place where we pride ourselves on our capitalist values, yet we still put up with the crappiest phones on the planet. We are not free to buy our cellphones from wherever we please and still be able to use it! While in Communist China they can!

All the cool features we have on our phones today were implemented on overseas cell phones way before they arrived on our shores. Yes, this includes mobile TV, MP3 playback, and camera phones. Presently in Korea video calling exists, and yes at a smooth frame rate. Check out this phone! It looks like a flying saucer, as if some alien accidentally dropped it on his last visit.

So why are we so far behind? Well, the wireless carries in the U.S. use different types of digital voice transmission modes. On top of that Europe and Asia use the same type of digital voice transmission mode but it is still different than the ones used in the U.S. As a result it is cheaper for a company to design a phone for Europe and Asia than accommodating their phone for differing U.S. standards.

Nevertheless the future of cellphones is brightening. Cellphones already resemble mini-computers, at the rate of technological progress soon they might surpass the ability of a Pokedex.

This is how cellphones work in other parts of the world. In Europe, where consumers can purchase phones anywhere, most people opt to buy discounted phones as part of calling plans, just like in the U.S. But in much of Asia, there are no discounts. Instead, mass cellphone production has led to very low prices and heavy usage. Throughout a lot of Asia consumers can easily switch among networks by popping SIM cards, the memory chips that store mobile numbers, in and out of their phones.

There is still hope for change in the U.S. In recent months, a growing chorus of players-consumers, regulators, and big companies striving to break into mobile communications – has sought to break down the existing system.

Verizon Wireless will soon allow wireless customers on its network to use a wide array of phones and mobile devices bought elsewhere. This will take effect by the middle of next year. Consumers will be able to go to virtually any electronics store and buy cellphones and other mobile devices for Verizon’s network as long as the devices meet the carrier’s minimum standards.

It isn’t clear whether Verizon will charge consumers using phones bought elsewhere the same price for its cellphone plans. If Verizon’s position becomes the standard for all U.S carries, Handset makers would be able to market directly to US consumers. The ramifications go beyond cellphones. Verizon hopes that electronics manufactures will create a variety of devices for its open network, such as notebook computers with wireless broadband personal music device, digital cameras, electronic book readers and portable gaming systems.

Verizon isn’t the only big fish making changes, Google is trying to enter the wireless market (as of yet Verizon hasn’t made an agreement to implement google’s future cell phone operating system). Over the summer; Google successfully persuaded the Federal Communications Commission to set aside a portion of the spectrum it is auctioning nearly next year for a new open network.

The company is gearing up to make a serious run at buying wireless spectrum, a chunk of the airwaves that can be used to provide mobile phone and Internet services, in a Federal Communications Commission auction in January. And it teamed up with handset makers and others in the tech industry to launch a new mobile operating system, Andriod, to power mobile phones and allow a greater range of applications and services. Its push could potentially expand the availability and decrease the cost of high-speed mobile Internet access to consumers and broaden the wireless applications they can use.

Apple has made headway in cellphone hardware and software by launching the I-Phone this summer. The I-Phone has a huge screen, is a pleasure to surf the web with, is extremely sexy, and it arrived in the US first!

Unfortunately, as with most advancements in technology something gets left behind. In this case of the mass distribution of cell phones, the loser is the telephone both. Yes, the compartment where Clark Kent turns into Superman. They are currently endangered and will most likely become extinct, off joining their brethen the record player and the slide rule. 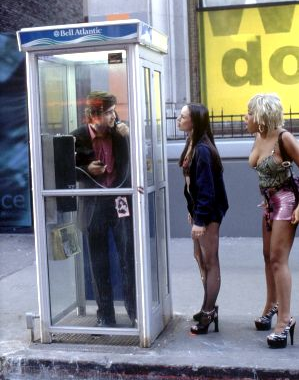 However, until all these new advancements arrive I have to deal with my current cellphone, Unfortunately, it got dropped last weekend and apparently the amplifier broke so now I have to scream into the phone for anybody to hear me. So if you call me please don’t be alarmed! Im mainly stcking 2 txting rght now. Hey at least I have a color lcd! So until I am done waiting one more year for my contract to expire I will have switch to an even older phone that doesn’t have a color lcd or a fully intact hinge. Yea, that’s how I roll.