Last month I got to go on the bachelor party of my sister’s finance. It was a tremendous time. I have to give credit to the best man for planning a highly synchronized and well thought out itinerary. We took Friday off and left work early on Thursday to give us ample time for the trip of a lifetime. We rented the biggest RV we could get from Cruise America. This would be our party van, enabling us to party non-stop the whole weekend. 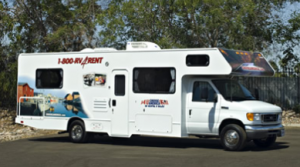 Michael, the man of the hour, was duped into thinking he was going to New York for a business trip. He was in an especially sour mood because he had made a bunch of plans for that weekend but had to drop them. We were planning to meet him when he landed at the airport but we were running late, for some reason we drove on some other road rather than I-95. We didn’t want him leaving the airport and going to his fake hotel. We pretended that I too was traveling to New York for a business trip and my sister told him he had to wait for me. I kept on texting him that my plane was stuck on the ground. Then I texted him that I lost my luggage. Whenever he called me I never answered the first time and half the time I would respond with an ambiguous text message. We finally arrived about two hours later, thank goodness he was still there. We gave him a hero’s welcome and got the party started again!

It was pretty late at this point so we couldn’t really do anything in the city. We drove to camp at a trailer park in New Jersey. We had a really nice view of the Big Apple. I spent about an hour trying to climb on the top of the RV, everybody else seemed to be able to do it without much trouble. The trick was to get a running start and ricochet of the tire and grab the top with both hands so you could hoist yourself up. I was able to reach the top once after about one hundred attempts. After I was thoroughly exhausted I was able to fall asleep rather easily outside on my sleeping pad. I had multiple dreams that night mostly pertaining to how I had forgotten my blanket.

The next day was all about White Water Tubing! I brought my river shoes so I was all ready to go. We all made sure to take a lot of Nalgene bottles to make we could hydrate our selves properly throughout the ride. Some of the rapids were pretty extreme, I’m glad nobody lost a limb. After tubing we played disc golf. It was my first time playing; I was told that the course wasn’t very good. There were a lot of trees in the way of the flag, and I found out I was not very good at throwing a Frisbee. Later that night we arrived at the Ommegang Brewfest. They had an RV camping section, which was really cool. That night they also played The Big Lebowski on a huge out door screen. We watched most of it then stumbled back the RV to crash for the night 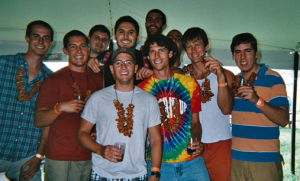 The next day was the highlight of the trip, the Ommegang Beer festival in Cooperstown. We got free admission because we were volunteers. I got one of the best positions in the admission tent. My job was mainly putting wristbands on other volunteers. Everybody was really friendly, before I knew it my shift was over and it was time to start sampling beers. Everybody put on their most colorful shirt and made pretzel necklaces. We were the highlight of the festival. There were 50 breweries and importers and over 200 Belgian and Belgian-style beers to choose from. What a great way to expand your palate! Great beer, great people, great music, and great beer. I highly recommend going to the Ommegang Brewery.